It is obligatory upon every Camp to participate in Memorial Day ceremonies, either with other patriotic organizations, or as Camps, in memory of the honored dead of our country.

Each member has a special obligation on and to Memorial Day.  He shall use his influence in every possible manner for the proper and general observance of this day, that Memorial Day, instituted by the Grand Army of the Republic, shall ever be held sacred by the people of our country.

In parade, members will conduct themselves in dignified and proper manner; will wear upon their left breasts the Regulation Badge; white gloves and dark clothing.

Memorial Sunday (Sunday preceding Memorial Day) should be observed by every Camp and every member by attending Divine services, preferably with affiliated organizations.

While our first obligation is to remember our fallen ancestors, we also pay homage to all who have died defending freedom and our precious Union in all wars and military actions. 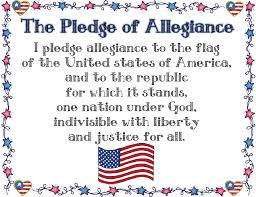 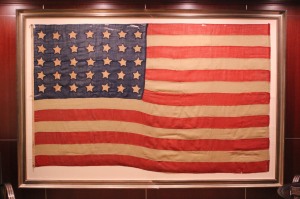 Above is the Pledge of Allegiance that we, as members of the Sons of Union Veterans of the Civil War, recite at every meeting.  To its right is the 35-star United States flag that was the official flag of our great nation during some of the hardest battles of the Civil War from 1863-1865.  It was the official flag of our country when Lee surrendered at Appomattox.  No stars were ever deleted from our flag when the southern states declared secession.  We remained one great nation though bitterly divided over a range of issues and beliefs.  After the war, we came back together as one nation and healed our wounds.  Union and Confederate veterans led the way in this effort because of the great respect that each held for the other from their experiences on the battlefield.  Congress declared that veterans of both sides were veterans of service to the United States of America.  As the pledge ends we are truly and shall ever be: “One nation under God, indivisible with liberty and justice for all.”

HEADQUARTERS GRAND ARMY OF THE REPUBLIC General Orders No.11, WASHINGTON, D.C., May 5, 1868

We are organized, comrades, as our regulations tell us, for the purpose among other things, “of preserving and strengthening those kind and fraternal feelings which have bound together the soldiers, sailors, and marines who united to suppress the late rebellion.” What can aid more to assure this result than cherishing tenderly the memory of our heroic dead, who made their breasts a barricade between our country and its foes? Their soldier lives were the reveille of freedom to a race in chains, and their deaths the tattoo of rebellious tyranny in arms. We should guard their graves with sacred vigilance. All that the consecrated wealth and taste of the nation can add to their adornment and security is but a fitting tribute to the memory of her slain defenders. Let no wanton foot tread rudely on such hallowed grounds. Let pleasant paths invite the coming and going of reverent visitors and fond mourners. Let no vandalism of avarice or neglect, no ravages of time testify to the present or to the coming generations that we have forgotten as a people the cost of a free and undivided republic.

If other eyes grow dull, other hands slack, and other hearts cold in the solemn trust, ours shall keep it well as long as the light and warmth of life remain to us.

Let us, then, at the time appointed gather around their sacred remains and garland the passionless mounds above them with the choicest flowers of spring-time; let us raise above them the dear old flag they saved from hishonor; let us in this solemn presence renew our pledges to aid and assist those whom they have left among us a sacred charge upon a nation’s gratitude, the soldier’s and sailor’s widow and orphan.

By order of JOHN A. LOGAN, Commander-in-Chief 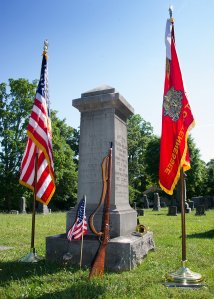 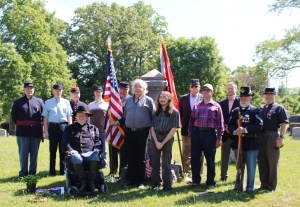 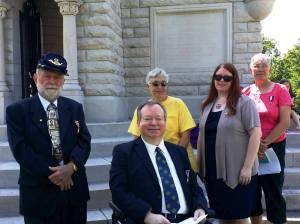